AT THE EDGE : Ms Ang Lay Hwa  and husband Ricky Tan are stand-in parents to 80 Thai children and eight AIDS babies. Orphanages like theirs are a small buffer to weakening family ties in crisis-hit Thailand. 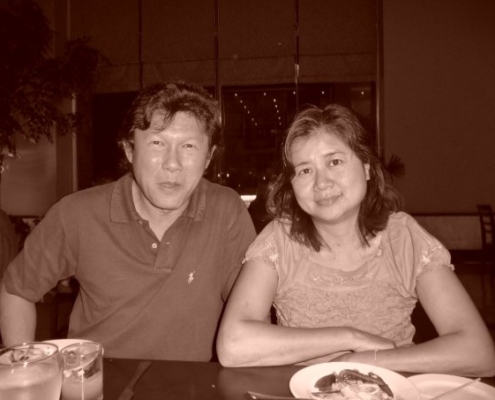 Mr. Ricky Tan’s troubled mind was clearly somewhere else as we were having lunch a few weeks ago at Great World City. He was thinking of a missing Thai teen called Nipha whom he and his wife had looked after for four years. They feared she might be in the clutches of a syndicate – perhaps working temporarily in a restaurant. He had saved her once – but she had gone missing again.
“Some Chiangmai restaurants are being used as holding areas for child prostitutes before they are sent out to brothels,” he explained. “I’m planning to look for Nipha,” said Mr. Tan.

“It sounds like a long shot but I want to join you,” I said, not knowing if the editor would buy the idea. We knew little of Nipha, 15, but the couple were old contacts. Five years ago, Singaporean Madam Ang Lay Hwa, 37, and Mr Tan, 42, a Malaysian, gave up their jobs to set up the AIDS Babies Centre (ABC) for AIDS babies and the Care Corner Orphanage Foundation, for 80 children, in Chiangmai, Thailand. Madam Ang, a National University of Singapore graduate, was a secondary school teacher while Mr. Tan, an American-trained theology graduate, was a church pastor. They uprooted their family of three young children to pursue their calling. We met the couple while researching a report on AIDS babies in Chiangmai last year.

Nipha was not an AIDS orphan but her story was also riveting. On New Year’s Day, Ricky called me. Nipha was sighted in Bangkok. Two days later, he called to say he had an address. Chief photographer Philip Lim and I flew to Bangkok the next day. The following three days were an eye-opener for us.

“Why don’t you write something positive? There is more to Thailand than prostitutes and AIDS,” a Thai social worker said to me in Chiangmai. This is an ancient civilisation. At its height, Thai culture and independence was much admired in the region, led by a long line of monarchs like the current King Bhumibol. During his reign, the economy has soared to new heights. But the bubble burst in July 1997 when the baht collapsed and started a crisis in the region. The Thais are now struggling. There are so many stories of kids being abandoned or sold by parents because people have no money.

“Mother said she needed to build a house and told me to work so that I could help her raise some money. She told me to work in the coffeeshop, but as I worked there, I slowly realised the girls had to sleep with men.”

At the heart of our story is an innocent 15-year-old Thai girl who has felt more pain and betrayal than most of us know in a lifetime. She has been hurt by her own mother, who first dumped her in an orphanage and then sold her to a sex ring. For just 4,000 baht ($190).

When Nipha Chasaw is packed off to a restaurant, she first thinks that she merely has to serve food to customers. Then the horror sinks in. A prostitution syndicate is using the restaurant as a holding area for virgins. And the girl knows that it is only a matter of time before she joins other girls who are distributed to brothels around the country.

Who will take on the might of the Thai underworld to rescue one helpless teen. Enter Singaporean Ang Lay Hwa, 37, and her Malaysian husband Ricky Tan, 42, who run an orphanage in Thailand. The couple care for Nipha. It was at their orphanage that Nipha lived before her mother whisked her away. And they are determined to save her from the sharks.

Mr. Tan tracks her down, only to be turned away by a thug. A chance advertisement in a newsletter leads him to a woman named Hope, who lives up to her name. Through luck, guts and sheer pluck, she manages to rescue Nipha, who has already spent 1-1/2 months at the restaurant. But our story is not over yet. When a girl has been let down by her own mother, who else will she trust? Nipha runs away. After hunting for six months, Ms. Ang and Mr. Tan find out where she is. Mr. Tan sets off to bring her back again.

It was nearing the end of May last year and Mr. Tan wondered if he would ever meet Nipha again. He had no idea where she was, no clue where to look for her. Then one of his employees suddenly remembered to convey a half-forgotten message to him. Nipha had called several days earlier. She was working at a restaurant in Sansai. There was hope! Mr. Tan immediately rushed to the place to look for her. From the outside, it looked just like another Thai eating house. But it was actually a halfway house to hold child prostitutes before they are sent out to brothels.

Nipha was serving some food to customers when she saw Mr. Tan enter the place. She broke down immediately. “Do you want to come home?” Mr. Tan asked. Nipha nodded. “Go pack your things.” As Nipha packed, a burly man came between them. He said fiercely: “She cannot leave!” Turning to Nipha, the man said: “You stay!” There was menace in the man’s voice. Mr. Tan tried another approach. “This girl is from my orphanage,” he said. “Are you her legal guardian?” the man asked smoothly. Mr. Tan knew he was beaten. The man could keep Nipha at his restaurant by force. And even the law could not help him.

Was there no hope for Nipha? About a week after his visit to the restaurant, Mr Tan spotted an ad in a local newsletter. It was from International Women’s Group (IWG) and in desperation, he just picked up the phone and called. The woman at the other end sounded indifferent, when Mr. Tan asked if she could help a child in trouble.

Woman: Yeah, like what?
Mr. Tan (impatiently): Look, I want to talk to your president.
Woman: Well, there’s no one else higher here. I’m the president.

This chance phone call was to change Nipha’s life again. The woman Mr Tan spoke to was Mrs. Hope Watcharaprecha, the president of the IWG and one of the gutsiest women you will ever meet. The American, who is married to a Thai, speaks her mind. She knows most people who matter in Chiangmai high society. And above all, she was willing to help. Mrs. Watcharaprecha listened to Mr. Tan’s story and came to a decision immediately. Yes, he could count on her. Why would the wife of a prominent Thai businessman want to tangle with the underworld to help a stranger?

Mrs. Watcharaprecha has a ready answer: “I sit down and imagine her (Nipha) knocking against the wall… Then I think about these people at Care Corner Orphanage. They raise her up from young… and now, they don’t know what to do. I said I must do something about it.”

She told Mr. Tan to call her in a couple of days. Meanwhile, he kept thinking of poor Nipha, trapped in that restaurant. When The New Paper visited the same restaurant, it looked deceptively quiet. But behind the restaurant is a colourfully decorated lounge with its own sets of tables and chairs, karaoke sets and hi-fi. A woman was seen entertaining a client. Next to the lounge was a room with two single-unit air-conditioners. Poor Nipha. The danger she faced was very real. This was confirmed by Mr. Narong Vijaykadga, vice-president of the Chiangmai-based Children and Youth Development Association, a voluntary organisation. Mr. Narong, 50, said syndicates usually buy children at a low price, and break them into prostitution before they sell them to the brothels. Estimates of child prostitutes in Thailand vary between 40,000 and 200,000. Would Nipha become one of them? A drop in the ocean, but…

TOGETHER AGAIN: Nipha reunited with Mr. Tan for the second time.

Hope Watcharaprecha knows most people who counts in Chiangmai society. To save Nipha, she was willing to hound them all. She approached policemen, politicians, lawyers – everyone with clout to save a little girl from a horrible fate. Some shrugged. Others just dodged the issue. When the law could not help, she decided to approach the mafia boss. Another lucky break came her way.

Mrs Watcharaprecha, who also runs a hardware company, found that one of her former employees was related to the leader of the syndicate that was holding Nipha. Through her, Mrs Watcharaprecha sent him a message. She said: “I asked him how much he wants for the girl. He said, 3,000 baht ($145). I said I’d pay, just release her in two days.” And she also sent him a veiled threat. “I told the messenger to let the boss know the people I know. And tell him to stay in his territory, and don’t touch mine.”

Here she was, threatening the mafia boss, even though her friends had refused to help her! Her sheer confidence must have scared him. Nipha was released within two days. Not a single baht was exchanged. Was the story ending happily? No, the end was still six months away.

A New Zealand couple offered to help Nipha rebuild her life, in Singapore. Singapore permanent residents Mrs Dawn Greenfield, and husband Dave, both 51, said: “We want her to be part of a family…she has had too much pain in her life.” But the offer back-fired. When Madam Ang mooted the idea to Nipha, she ran away, fearing she would be sold away again. After all, how could a girl who had been let down by her own mother trust complete strangers?

Six months pass. Six months of waiting, wondering, agonising. Where is Nipha? Finally, another lucky break. Someone has sighted Nipha and tipped Mr. Tan off. Now he’s hoping to bring his little girl back, for good. He has heard she is working as a maid. And we are with him in Sara Buri. Near the place, our mini-bus turns into a side road leading to a provision shop with a public telephone.

Mr Tan’s staff, Mr Srichan Latoo, 29, is asked to confirm that Nipha was indeed living at the address in hand. He emerges shortly: “Nipha is there. But people in the house want the police to check us first.” Half an hour later, a police car arrives. Two officers come to inspect us and escort us to Nipha. Nipha is standing by the roadside. We hop out. Mr Tan runs to her and hugs her. “This is Nipha,” he says. As if we didn’t know! Nipha has been working as a maid with 48-year-old Madam Lator since August last year. She’s safe. And she’s ready to return “home” to Mr. Tan.

He says he will pay Nipha 1,500 baht (the same salary she is getting) to help him out at the orphanage. What’s more, she can resume her studies. Madam Lator says with a huge sigh: “She can go back with you after I find a replacement. Hopefully next month.” Nipha, who is sitting nearby, broke into a big smile. She is going home again to a future that a small group of people are shaping for Thailand’s many children of no hope.

Is the help a drop in the ocean? Mrs Watcharaprecha had said that for every child who is saved from prostitution, there may be 10 others who are not. Even so, these are drops that must surely make a difference.